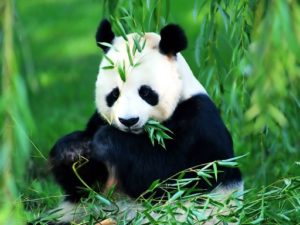 Scientists have spent enough time arguing and studying to confirm its relation with either the raccoon or bear. The panda possesses a body similar to that of a bear and the other physical characteristics like the male genitalia resembles that of a raccoon. According to recent research and studies, it has been proved that the closest relative of a panda is the spectacled bear belonging to South America.

Pandas were first found around 3 million years ago and the original habitat of this animal is noted to be Northern Vietnam, some areas of Myanmar and South and East China. With the fossil evidence their existence has been stretched even towards North Beijing. As of now, pandas are evident in six of the major isolated forest region in Shaanxi, Gansu and Sichuan in the Chinese provinces. The giant pandas are commonly found in the coniferous and broadleaf forests at the height ranging between 5,000 to 10,000 feet.

The bamboo forest located in the Tibetan plateau is their main habitat that lies around 10,000 feet above the sea level. It is a damp coniferous forest and during winter and spring they move to the lower elevations looking out for edible bamboo. Dense mist and heavy rain are common in these regions. While they roam around, they have to protect themselves from the farmers of the river valleys if they want to survive.

Panda feeds on bamboo for more than 21 hours per day to manage and support their huge body. Unlike bears, Pandas do not hibernate during the winters and instead they remain comfortable within the unbearable weather by moving up and down in their habitat. They take rest or sleep on tree trunks, cavers, outcroppings of cliffs or any other non permanent shelters of the caves. You can see pandas resting during a hot sunny day and also when the ground is frozen up with snow.

The giant pandas measure four to six feet in length and three to four feet in height when they are on their four legs. Males are mostly found to be heavier than females, reaching 250 pounds while females hardly surpass around 220 pounds.

Life at the zoo for this endangered species is pretty different from life in their natural habitat, and they seem to have a longer lifespan than when they are in their own habitat. Zoo pandas of 35 years of age were recently revealed by Chinese scientists. Even though they have a long life in captivity, the breeding pattern is intense in the wild when compared to that of the zoo.

Their major natural food is bamboo constituting up to 99% of their daily diet even if it feeds on grasses and other animal carcasses very rarely. In zoos they are given extra care, love, pampering and a recreated natural atmosphere and they mostly feed on rice gruel, sugar cane, bamboo, special high-fibre biscuit, apples, carrots and even sweet potatoes.

Their medium of communication differs from anything like urine, scent marks, calls, occasional meeting and even tree scratches. A panda spends an average day by mostly feeding, resting, playing and searching for food. There are plenty of organizations and steps initiated to save this endangered species from extinction and studies are still on its way to learn more about its behaviour and other patterns of life!

One thing to note is that global warming is reducing their endemic natural gaming habitat and without the zoos they probably could not survive as a species. So let’s not gamble with their survival and make an effort to lower carbon emissions.

How To Catch The Early Signs Of Diabetes

One thought on “Pandas, elusive animals to be saved”